Governor Romeo Zima, this Thursday (21/4), participated in the Inconfidência Mineira Day ceremony, which was held in Ouro Preto, in the central region of Minas, and highlighted the performance of health professionals, the importance of science and the vaccine. Overcoming the epidemic to resume normal life. In the past two years, the event has not been held due to Covid-19 prevention measures.

“The mere fact that we are here again shows how close we are to definitively overcoming the formidable challenge that was the pandemic. We have faced a number of wars in the past two years. In Minas, we have lost 61,000 people to this terrible disease. A frightening number that resonates in the longing that Every family will carry it forever.But a figure that would have been much higher had it not been for a collective agreement.The ruler said that science, backed by the miner’s farsighted behavior, allowed the initial limitations to be gradually overcome.

The ruler also highlighted in his speech working together for the welfare of the population.

On behalf of all the health professionals who worked and faced this turbulent period in society, Zima highlighted Nursing Technician Maria Bom Susiso Pereira, better known as Cissé, who has been on the front lines in the fight against the pandemic since the beginning. He was the first person to be vaccinated in Minas Gerais. I got the big medal.

“The ultimate common drive to save lives allows and enhances dialogue. This is how we faced Covid-19 here in Minas. So I thank everyone who worked in this fight and sacrificed themselves. I am especially grateful to the healthcare professionals who have worked through arduous schedules to ensure that all patients receive care. and the chance of survival.Therefore, the most symbolic honor of this ceremony is the Grand Medal of Nursing Technician Maria Bom Susiso Pereira, Cisé.It represents not only the struggle of health professionals, but the beginning of the vaccination against Covid-19, by being the first in Minas Gerais to be Immunize him. His image will forever be associated with our hope,” he said Governor Governor.

In his speech, Zima stressed that in times when humanity is recovering from crises, such as this one from a pandemic, there are two main points from which people yearn for a full recovery: peace and freedom. According to the governor, freedom is not only achieved when one comes and goes or expresses one’s opinion, but also comes from guaranteeing the basic rights of citizens and this is the main work of his government. 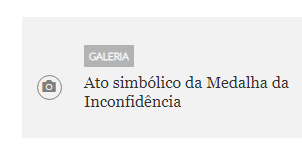 “There is no complete freedom for those who are hungry or cannot find work, for those who do not have decent educational conditions, for those who are sick have no place to treat themselves. What freedom does an employee have who, after working all month, all year ‘He does not know when he will receive the salary and the thirteenth salary? From my first day as governor, my greatest effort has been to secure freedom in the broadest, most unrestricted way possible for the miners, in every possible way that fits this word.’ He emphasized ensuring that the rights of every individual would be preserved so that their fate would be decided increasingly by their choices.

Romeo Zima ended his speech by saying that the main objective was for Minas to resume the path of progress.

“We have made and are making the largest investments in health and education of all time in this state. We are creating over 200,000 jobs. The servants of Minas today know that their sacred right to a decent wage is inviolable. For all these reasons, I am confident that today’s miners Freer than they were on January 1, 2019 when I took office, amid a demonstration by mayors who demanded the realization of the fundamental right to receive constitutional funds.Now I retain the function of governing so that this freedom obtained is not a surrender to my government, but a lasting legacy in the future of Minas. He concluded that our state is moving from now on only in one direction towards progress.

See also  What does science know so far about the relationship between blood type and Covid-19?

This year, the highest honor awarded by the state of Minas Gerais, in addition to the candidates in 2022, went to those awarded in 2020 – when the event was not held due to the pandemic. In 2021, there were no candidates. In all, 170 were honored.

The Inconfidência Medal was created in 1952 by Governor Juscelino Kubitscheck and has four designations: Large Collar, Grand Medal, Medal of Honor, and Inconfidência Medal. It is presented to the personalities and institutions that have contributed to the development of Minas Gerais. In addition, traditionally, on April 21, the state capital is symbolically transformed into Ouro Preto.

The grand medal was awarded to the Senator of the State of Minas Gerais and the President of the National Congress, Rodrigo Pacheco. The parliamentarian cannot attend the event due to agenda obligations. Governor Romeo Zima highlighted the role of the Senator of Minas Gerais in the search for peace and the interests of Minas.

“The President of the National Congress, Rodrigo Pacheco, represents us well as the recipient of the Grand Medal of the Inconfidência Medal. He could not share in this honor personally, but our gratitude for his performance has been recorded. The President of the Authority who puts the interests of the miners and Brazilians above his personal and political interests is the model of the Chairman of the Authority. which all others must reverse. In the streets of Ouro Preto, the Age of Enlightenment appeared in Brazil. This is the embryo in the country of the concept of liberal values ​​of freedom and equality. May the memory of the Inconfidentes live forever in the preservation and advancement of these inalienable rights.”

The world’s largest radio telescope seeks to double its capacity