Perhaps no case in recent history has emphasized the need to connect with nature as much as the Covid-19 pandemic. During traffic restrictions, city dwellers found parks and gardens a source of calm and joy. That beautiful feeling that fills us when smelling the grass, looking at the trees or hearing the sound of water is more than just a perception. As a host of new studies demonstrate, these are clear benefits that nature does so well. So much so that in a joint movement with medical science, urbanism is mobilizing itself so that it gains more space between buildings and streets, making it easier to access the so-called green cure.

The latest guide on the topic, published this month in International Journal of Biological Psychiatry, showed that spending more time outdoors changes brain structure, increasing gray matter in the prefrontal cortex, an area involved in planning and regulating actions and cognitive performance. It is the realization that these functions work better when we spend more time in well-ventilated environments. The range of conditions in which nature acts as a remedy is enormous. And those who prove that they are internationally respected institutions, such as Harvard University in the United States, whose scientists have found that living near forests, parks and gardens is associated with longer life. “Connecting with nature can actually improve aspects of our health, especially mental health,” says neuroscientist Elisa Kozasa, of Israelita Albert Einstein Hospital, in São Paulo. 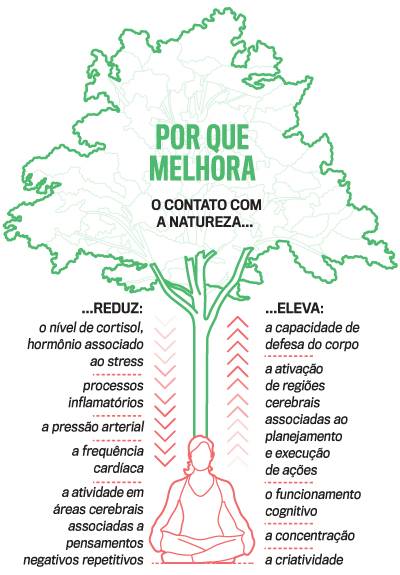 The benefit is so impressive that “spending more time in nature” has become a prescription in many countries. In Scotland, doctors can prescribe bird watching and beach walks to help treat mental illness, heart disease and diabetes. In South Korea, the government is creating dozens of healing forests for its stressed-out citizens. This practice is also referred to as healing in Japan, where it is called a forest bath. These data support a new vision of urban planning, which now takes into account the curative power of greenery. “The biome-loving city movement recommends providing a green area five minutes from people’s homes,” says Birola Filippet Brucanelli, professor of landscape at McKenzie Presbyterian University. “The vegetation leaves a functional point of view to be seen as an organism to which people relate.” This concept is based on biophilia, the theory of biologist Edward O. Wilson according to which the human brain is formed to respond positively to nature. It’s hard to doubt that. A study in Canada found that adding just ten trees in every city building had an effect on people’s perceptions of their health and well-being equivalent to a $10,000 increase in household income. As American journalist and writer Florence Williams reported at work Nature’s Fix: Why Nature Makes Us Happier and HealthierAnd and more creativeNature, it seems, is useful to civilization.