Las Vegas bills itself as The Entertainment Capital of the World, and it is easy to see why. Vegas is an adult’s playground, with some of the world’s most luxurious casinos, bustling casinos, vibrant nightlife, and amazing shows that rival the world-famous Broadway musicals.

Hotel Nevada was the first hotel to open its doors in Las Vegas, Nevada. Nevada became a U.S. state in 1864, and Hotel Nevada opened for business in 1906 before changing its name to Golden Gate Hotel & Casino in 1955. Amazingly, it still operates today on Fremont Street in Downtown Las Vegas. While the Golden Gate Hotel & Casino is an iconic, symbolic piece of Las Vegas history, it is nothing compared to some of the incredible resorts you find on the famous Las Vegas Strip.

Try as you might, it is impossible to visit Las Vegas and not see the gargantuan Caesars Palace. Founded in August 1966, Caesars Palace is one of the most famous casinos globally, not only on the Las Vegas Strip. The hotel, which has a Roman Empire theme, has hosted some iconic boxing matches over the years and is a central hub for Las Vegas betting and gambling as a result.

The 3,960 room luxury hotel allows its patrons to reside in decadence while its vast selection of restaurants excites the tastebuds of even the most hardened food aficionados. Then there is the long list of global superstars who have enjoyed a residency at Caesars Palace, including Frank Sinatra, Dean Martin, Rod Stewart, and more recently Celine Dion, Mariah Carey, and Gloria Estefan.

You have to visit Caesars Palace if you ever set foot on Las Vegas soil. 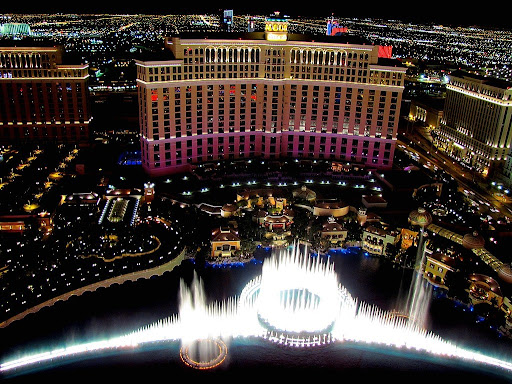 The Bellagio is one of the newer Las Vegas Strip casinos, opening its doors to the public in October 1998. Despite its relative infancy compared to some other Vegas hotels, the Bellagio already enjoys legendary status.

Its main building towers across the Las Vegas skyline. Its 3,950 luxurious rooms are known for their elegance, as is the eight-acre lake boasting the Fountains of Bellagio, one of the largest dancing water fountains anywhere in the world.

Like other Strip resorts, Bellagio has everything under one roof, including the best eateries on the planet, high brow stores, and is the home of the Cirque du Soleil’s aquatic production O.

Bellagio is the place to go if you love playing poker because the game’s biggest stars frequent its poker room. Pots in the Legends Room can far exceed $1 million! The Bellagio is where you are most likely to catch a glimpse of your favorite poker star if that is your thing.

Of course, movie buffs will recognize Bellagio from the 2001 George Clooney movie Ocean’s Eleven or the 2009 film 2012, where an earthquake destroys it.

The Venetian Las Vegas is another must-see Vegas hotel resort. It is built on the site of a former Vegas great, the Sands Hotel, which was demolished in 1996; Venetian opened three years later.

The late billionaire Sheldon Adelson came up with the idea of Venetian while on honeymoon in Venice. His dream was to recreate the Venice streets inside a mega-resort on the Las Vegas Strip. Adelson fulfilled his dream.

See also  Indigenous peoples, civil society and businesses are calling on the United States to recognize the Forest Conservation Fund

You would be forgiven for thinking you were in Venice when you step into the Venetian. You find various famous Venetian landmarks such as the Piazza San Marco, the Lion of Venice, and Palazzo Ducale. The ceiling is a lifelike blue sky, and the hotel even features a canal with working gondolas!

Those of you who enjoy vibrant nightlife should visit TAO Nightclub. The Asian-inspired venue opened in 2015 and is one of the best nightclubs worldwide, one with a 20-foot tall Buddha statue, an infinity-edge pool, and some of the most incredible DJs to have ever spun a record.