health authorities in United State On Friday (16) it was confirmed that a passenger traveled from Nigeria to a country Texas diagnosed with “monkey pox”It is a rare and serious tropical disease that can be fatal.

This is the first case of the disease diagnosed in the United States in nearly two decades.

According to the Centers for Disease Control and Prevention (CDC), a public health research agency affiliated with the National Health Department, and the Texas Department of Health, the patient, who is a resident of the United States and has not been identified, , in a hospital in Dallas, is in isolation and in stable condition.

“The CDC is working with the airline and with state and local health authorities to contact passengers and others who may have come in contact with the patient,” the agency said in a statement.

The patient traveled on two trips. From Lagos (Nigeria) to Atlanta, Georgia, departure on July 8th and arrival on July 9th, and from Atlanta to Dallas on July 9th.

“Travelers were required to wear masks on these flights, as well as at US airports, due to the Covid-19 epidemic. Thus, the risk of transmission of monkeypox through respiratory droplets on aircraft and airports is believed to be low.” The Center for Disease Control said.

The agency said it was assessing the potential risks to people who had close contact with the traveler on planes and elsewhere. These people are interviewed by health authorities.

“We have confidence in the federal, state and local medical professionals working to ensure this virus is contained,” Dallas Mayor Eric Johnson wrote on Twitter.

In a statement, Dallas County Health Department Director Philip Huang said there was no cause for concern. “There is very little risk for the general public,” Huang said.

The injured passenger was at Atlanta (above) and Dallas airports; Because of the precautionary measures taken by Covid-19, the risk of infecting others is believed to be low – Image: Reuters via BBC

According to the Centers for Disease Control and Prevention, “Monkeypox belongs to the same family of viruses as smallpox, but causes a milder infection.”

The disease was discovered in 1958, when two outbreaks occurred in the monkey colonies used in the research. It was these initial outbreaks that gave the disease its name.

“Experts have yet to determine where monkeypox is hiding in the wild, but small mammalian rodents in Africa are thought to have a role in spreading the virus to humans and other forest animals such as monkeys,” the CDC says.

The first case in humans was identified more than a decade later, in 1970, in the Democratic Republic of the Congo.

The Centers for Disease Control and Prevention (CDC) states that at that time, there was a major effort to eradicate smallpox (the last natural case occurred in 1977, which was officially considered eradicated by the World Health Organization in 1980).

Since the first patient was identified in 1970, human cases of infection have been reported in nine other countries in Central and West Africa.

Since 2017, more than 400 cases of the disease have been diagnosed in people in Nigeria.

In 2003, an outbreak infected 47 people in the United States, none of whom died. According to the CDC, this was the first time that monkeypox had been confirmed in humans outside of Africa.

At the time, the virus was brought by rodents imported from Africa, which transmitted the disease to prairie dogs (a type of rodent native to North America) used as pets.

According to the Centers for Disease Control and Prevention, there have only been five other human case records outside of Africa. In 2018, three people were infected in the UK and one in Israel. In 2019, there was a case in Singapore.

This year, in addition to the case identified in Texas, three more cases have been recorded in the UK. The CDC notes that these cases are unrelated to the patient in Texas.

The first symptoms can be flu-like and be accompanied by swollen lymph nodes. After these initial signs, patients develop a rash on the face and body. In most cases, the infection lasts between two and four weeks.

“In this specific case (from Texas), lab tests at the Centers for Disease Control and Prevention showed that the patient had a strain more common in parts of West Africa, including Nigeria,” the CDC says.

The agency explained that “infection with this strain of monkeypox is fatal in about one in 100 people. But rates may be higher in people with weakened immune systems.”

Among humans, scientists believe the primary method of transmission is through respiratory droplets. Since these droplets are unable to circulate for more than a few metres, experts believe that infection in these cases occurs when there is close and prolonged contact with infected people.

See the video below: In 2020, the world celebrates 40 years of smallpox eradication 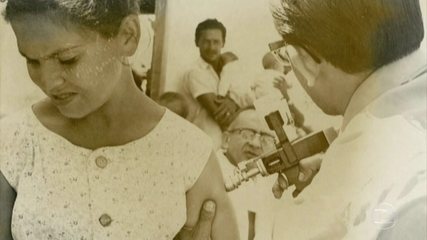 Infection can also be transmitted through contact with body fluids and wounds, or through contaminated objects.

The CDC says there is no proven, safe treatment for this disease. But the agency notes that the smallpox vaccine has already been used to control previous outbreaks, such as the one in the United States in 2003.

Bolsonaro asserts that he challenged Anfisa: “Do they not believe in science?”