Brasilia – The President of the Instituto Cuesto de Ciencia (IQC), Natalia Pasternak, and the CEO, Paulo Almeida, met Wednesday morning (03) with the President of Cunas, Nisio Fernández and with technical assistance from the Council to deepen the details of the course on the use of scientific evidence for decision-making, which will be presented by ICQ, Through the Columbia Global Center, to state health administrators and staff.

The idea of ​​strengthening training, according to Pasternak, arose from the realization of the gap in the training of undergraduates in public administration at Fundação Getúlio Vargas (FGV), regarding the use of scientific evidence in the decision-making processes of managers. “We took this specialty into the course at the behest of the institution itself, as there was no preparation for future managers and legislators on the use of evidence in public policies,” he explained.

The idea of ​​looking for Conass to make this partnership viable arose when transferring the discipline to the classroom, when Pasternak and Almeida realized that the standing of directors and elected representatives could benefit. 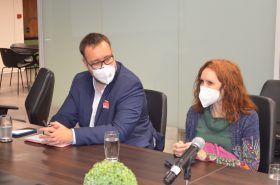 Nisio Fernandez, President of CONAS, praised the initiative and drew attention to the council’s ability to penetrate state health secretariats, allowing projects to continue. “We understand the unified health system as a state policy that transcends governments. We have the capacity for political action within the state administration that few institutions can achieve with such speed and legitimacy,” he said.

For him, the course should be delivered in modules, with state health secretaries and their key teams as the first to receive training, because they are the ones who judge at the strategic level.

See also  Now will you do? Judge sets deadline for evacuating Hospital de Curaçao in Cascavel

Pasternak and Almeida also visited the Strategic Information Center of the SUS Department in Cieges. The panels available on the platform, configured as a data science project, developed and made available by the Board, were presented by Kunas Communications Director Marcus Carvalho, to facilitate access to a range of information that supports decision-making and consultation. .

At the meeting, criteria such as audience, duration of the course, method, location and date for the start of training, which should continue in November, were determined with the help of Kunas technology as a pilot.