Amazon announced, Wednesday (24), its new launch in Brazil Echo Show 8 for R$999 and the Echo Show 5 for R$599. Both feature camera improvements for video calling and are already available on Amazon’s website and partner e-retailers.

According to Tom Taylor, Senior Vice President of Amazon Alexa, customers made three times the number of smart video calls globally compared to the previous year. “With these new Echo Show devices, we focused on connectivity functionality, brought a powerful camera with digital zoom and framing capability to the new Echo Show 8, and upgraded the camera to the new Echo Show 5,” he says.

Among the versions, the Echo Show 5 is the simplest model. With a 5.5-inch screen, it has undergone improvements in the camera, which now has a resolution of 2 megapixels, twice the resolution of its predecessor. Customers can also access the device’s built-in camera to monitor the home while it is away. The Echo Show 5 is available in black, white and blue.

Available in black and white, the Echo Show 8 has an 8-inch HD display, an octa-core processor and dual stereo speakers, ensuring better sound quality. The camera is 13 megapixels and has undergone improvements, the company highlights. The device should now automatically frame and zoom during video calls, with the goal of keeping everyone in the middle of the screen. 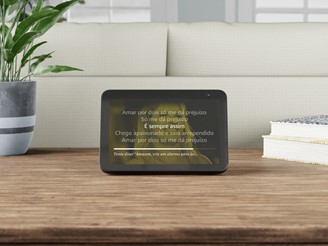 The new second generation of the Echo Show 2.

A new version of the smart speaker, with an 8-inch HD smart screen, voice commands via Alexa and a 13-megapixel camera.