A 70-million-year-old fossil was recently discovered in China’s Jiangxi Province. This discovery preserved the embryonic skeleton of A healthy dinosaur in an egg From Oviraptoridae – Extinct herbivorous dinosaurs and carnivores associated with birds – nicknamed Baby Yingliang after the museum it currently houses.

Because of the children’s bones dinosaurs Being so rare and fragile, the find is viewed as a unique find. From the researchers’ perspective, the expectation is that the fossil may reveal a new perspective on the relationship between some classes of dinosaurs and birds living today.

According to the report from the University of Birmingham in the United Kingdom, this is It is about 17 centimeters long and has a 27 centimeter long dinosaur from head to toe. Had this creature survived to adulthood, scientists believe it would have reached 10 feet in length.

It has also been analyzed in other fossils from Oviraptoridae All over the world, archaeologists suggest that dinosaurs changed position inside the egg as much the birds contemporary. In modern birds, this behavior is described as the act of “bending,” which is controlled by the central nervous system and is critical to successful incubation.

The researcher, Waisum Ma, who is responsible for the study, sees this discovery as something new for many areas of science. “We were surprised to see this embryo beautifully preserved inside a dinosaur egg, lying in a bird’s position. This position had not been recognized in non-avian dinosaurs before,” he said.

The past of dinosaurs 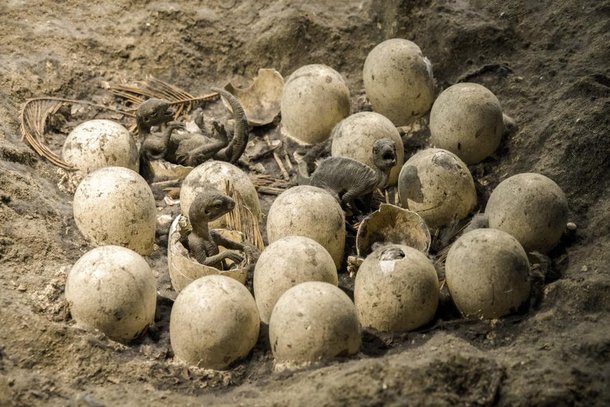 As far as we know today, all birds evolved directly from the two branches of dinosaurs called theropod, which includes creatures like the T-Rex and other smaller velociraptors. However, pre-incubation behavior is not the only behavior that modern birds have inherited from their dinosaur ancestors.

Researchers said these same dinosaurs are known to sit on their eggs to help them hatch. The fossil, which was found in Jiangxi Province, was reportedly discovered by a company called Yingliang Group in around the 2000s and was left in a warehouse for more than 10 years.

After this period, the artifact was discovered by the staff of the Yingliang Stone Museum of Natural History, with the support of the company. Since then, the fossil has been analyzed by researchers to determine the behaviors most common among modern dinosaurs and birds.